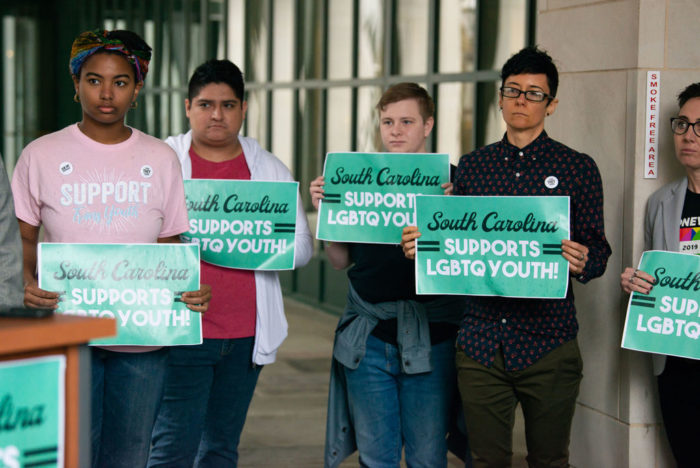 CHARLESTON, SC – Today, the U.S. District Court for the District of South Carolina entered a consent decree that declares South Carolina’s 1988 discriminatory anti-LGBTQ curriculum law unconstitutional and bars its enforcement. The court’s decree comes two weeks after a federal lawsuit was filed on behalf of the high school student organization Gender and Sexuality Alliance, as well as the Campaign for Southern Equality and South Carolina Equality Coalition, including their members who are public school students in South Carolina. The statute prohibited any discussion of same-sex relationships in health education in public schools except in the context of sexually transmitted diseases. The lawsuit was filed by the National Center for Lesbian Rights and Lambda Legal, along with private counsel Womble Bond Dickinson, Brazil & Burke, and law professor Clifford Rosky.

You can read the court’s consent decree here.

“I am very excited that this discriminatory law can no longer be enforced in South Carolina, and I hope we can continue to work toward a more accepting and equal state-wide community,” said Eli Bundy, a tenth grader who is the president of the Gender and Sexuality Alliance (GSA), an organization of high school students at a public magnet school in the Charleston County School District. “I know how frustrating it can feel to be told by a teacher that they can’t talk about who you are. I’m so grateful that no other South Carolina student will have to go through school feeling like they have been erased.”

The lawsuit, Gender and Sexuality Alliance v. Spearman, alleged that S.C. Code § 59-32-30(A)(5), a provision of the South Carolina’s 1988 Comprehensive Health Education Act, violated the Equal Protection Clause of the Fourteenth Amendment to the U.S. Constitution by discriminating against students who are lesbian, gay, bisexual, transgender, and queer (LGBTQ). The statute prohibited districts from including in their health education any “discussion of alternate sexual lifestyles from heterosexual relationships including, but not limited to, homosexual relationships except in the context of instruction concerning sexually transmitted diseases.”

The law singled out LGBTQ students for negative treatment and did not impose any comparable restrictions on health education about heterosexual people. Any teacher who violated the provision was subject to dismissal. The South Carolina Attorney General had recently issued an opinion that a court would likely find the law unconstitutional. In response to a motion by the parties in the case, the court agreed the discriminatory law violated the equal protection requirement of the U.S. Constitution and barred state officials from continuing to enforce the law any longer.

“In South Carolina, people across the political and ideological spectrum understand that no one should be excluded because of their LGBTQ identity.  We have common ground in the shared goal of ensuring that all students are safe, respected, and supported in school,” said Kevin Hall, office managing partner at Womble Bond Dickinson based in Columbia, SC. “This court order means that we can put this clearly unconstitutional 32-year-old law behind us, and it marks a new day for LGBTQ students here, who can now go to school without the stigma that this law cast over them.  My hat’s off to the courageous students in South Carolina who spoke out against this damaging law.”

The lawsuit is the latest constitutional challenge to anti-LGBTQ curriculum laws, which still remain in a handful of states. In 2019, a lawsuit in Arizona brought by NCLR, Lambda Legal, Professor Rosky, and private counsel led to the state legislature repealing the challenged law. In 2017, the Utah legislature repealed similar state laws following a 2016 lawsuit brought by NCLR and private counsel.

Photos of Eli Bundy, Kevin Hall, and other advocates involved in the case are available for publication at this link, courtesy of the organizations in this case.

The Campaign for Southern Equality works for full LGBTQ equality – both legal and lived – across the South. Our work is rooted in commitments to empathy and equity. http://www.southernequality.org

The National Center for Lesbian Rights (NCLR) is a national legal organization committed to advancing the human and civil rights of the lesbian, gay, bisexual, transgender, and queer community through litigation, public policy advocacy, and public education. Since its founding, NCLR has maintained a longstanding commitment to racial and economic justice and the LGBTQ community’s most vulnerable. http://www.nclrights.org

Lambda Legal is a national organization committed to achieving full recognition of the civil rights of lesbians, gay men, bisexuals, transgender people and everyone living with HIV through impact litigation, education and policy work. More information at: www.lambdalegal.org

South Carolina Equality is a non-profit organization with the mission to secure equal civil and human rights for all lesbian, gay, bisexual and transgender South Carolinians and their families, and has a vision of a South Carolina where everyone is equal. www.scequality.org

This website uses cookies to improve your experience while you navigate through the website. Out of these, the cookies that are categorized as necessary are stored on your browser as they are essential for the working of basic functionalities of the website. We also use third-party cookies that help us analyze and understand how you use this website. These cookies will be stored in your browser only with your consent. You also have the option to opt-out of these cookies. But opting out of some of these cookies may affect your browsing experience.
Necessary Always Enabled
Necessary cookies are absolutely essential for the website to function properly. This category only includes cookies that ensures basic functionalities and security features of the website. These cookies do not store any personal information.
Non-necessary
Any cookies that may not be particularly necessary for the website to function and is used specifically to collect user personal data via analytics, ads, other embedded contents are termed as non-necessary cookies. It is mandatory to procure user consent prior to running these cookies on your website.
SAVE & ACCEPT